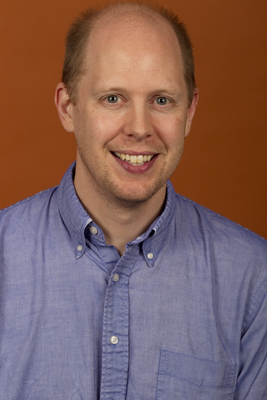 J. Mark Schober is the winner of the 2017 Paul W. Zitzewitz Excellence in K-12 Teaching Award from the American Association of Physics Teachers. He teaches physics, engineering; and astronomy and advises several student groups.

He is a founding member and past chairman of STEMteachersNYC, a grassroots teachers’ professional development group, a former president of the American Modeling Teachers Association (AMTA) and a former Web master for the St. Louis Area Physics Teachers (SLAPT) and, in his capacity as a leader of this organization, has administered numerous science workshops for teachers all over the country. He has previously been awarded the Presidential Award for Excellence in Mathematics and Science Teaching (2007) and the Gene Fuchs Award from the St. Louis Area Physics Teachers (2009.) He received his BA from Concordia College in physics, mathematics, and theater arts, and his MAT from Miami University of Ohio.

Schober said, “I am humbled and honored to be recognized by AAPT with the Paul Zitzewitz Award. I am thankful for every interaction with my teachers, colleagues, and students whose patience, insight, hard work, good humor, and willingness to try things has enabled us all to grow, learn, and have fun in the process.”

J. Mark Schober is New Head of Science Department in the Upp...

08.30.2011
J. Mark Schober is New Head of Science Department in the Upper School

J. Mark Schober has taught physics, astronomy, meteorology, and occasionally chemistry over the past fifteen years. He comes to us from an independent school in St. Louis and, most recently, from Columbia Secondary School for Math, Science, & Engineering in Harlem. Since 1998, he has been involved with the Modeling Instruction Program as a workshop leader, curriculum editor, practitioner, and consultant, and now is president of the American Modeling Teacher’s Association. Mark served as webmaster and workshop leader for the St. Louis Area Physics Teachers and has worked with New York teachers to form a similar professional development community, Physics Teachers of NYC. He has sung with a variety of choral, church, and jazz groups, has led student trips to the Grand Canyon, Ozarks, Minnesota, and Everglades, and has successfully used power tools to finish a basement, build furniture, and make lab equipment. Mark and his wife, Smith, live in Manhattan with a dog and two cats, thousands of books, and an extensive collection of model trains.